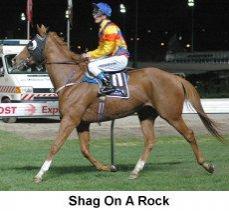 Bought by young trainer Rebecca Waymouth to compete on the picnic circuit, Shag On A Rock is aiming for successive metropolitan wins at Wednesday's Victoria Racing Club meeting at Werribee.

Waymouth, 23, bought Shag On A Rock at a tried-horse sale at the Melbourne Showgrounds with her mother Debbie, who rides at the picnics.

A former Melbourne University student with a Bachelor of Science degree majoring in chemistry, Waymouth paid $2,200 for the gelding who had won one of 18 starts at that stage, a Terang maiden, but his form had tapered off after breaking through at his 15th start.

"My mother was going to ride him at the picnics but my brother Rowan (apprentice Rowan Waymouth) rode him one morning and said he went better than a picnic horse," said Waymouth who has four horses in work as well as a couple out spelling.

"His handicap rating was only 53 and I had to take him wherever I could to get a start."

The gelding has had 19 starts since joining the Waymouth stable for four wins and five placings.

Now a six-year-old, Shag On A Rock won at his 11th appearance for Waymouth in a Sale class one (1600m) on July 31 last year and has made good progress since winning at Traralgon and Pakenham last November.

Two starts ago he chased home Ilbach and Pie Oh My when third at Cranbourne over 1600m on April 7 before backing up six days later to score by two lengths from Wednesday's rival Itsamonty in a 1600m race at Moonee Valley.

"He was my first runner in town and I didn't want to go unless I thought he could weigh in," Waymouth said.

"I was surprised with how well he finished it off.

"He has a really good sprint but not for long."

Apprentice Jason Benbow had the winning ride that night but Rowan Waymouth, who has won two races on Shag On A Rock, takes over in Wednesday's Hoppers Crossing Hcp (1600m), a non-claiming class six event for four-year-olds and upwards.

"He's done well since, looks a million dollars and Werribee will suit him," Waymouth said.

But she said Shag On A Rock had a few little quirks.

"He hates being boxed so overnight I put him in a shelter and during the day he's in a paddock," she said.