After gaining her trainers licence in December 2001 Bec’s first runner was Serengetti Blaze (affectionately known as “Chuckie” named after the rugrats character) @ Woolamai on December 22. It was a dream start to Bec’s training career as “Chuckie” proved too strong for his opposition and was a easy length victor over the 1000m journey. “Chuckie” played an integral part in Bec’s training career as his racing career spanned over the next 5 years and included a further 9 wins, 9 seconds and 15 third placings at both the picnics and the proffesionals.

It wasn’t until Bec had completed her studies that her first professional winner occurred. After training several placings Bec’s first professional winner was Shag on a Rock @ Sale on 31st July 2005. “Shaggy” would prove to be a valuable asset to Bec’s team. Shaggy was a $2000 purchase from a mixed sale and went on to earn Bec over $80000 and provided her with her first city winner at Moonee Valley on 13th April 2006. 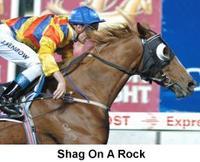 Shag on a Rock